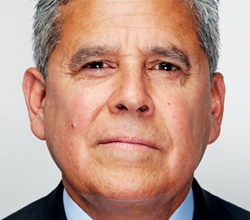 Robert Rodriguez Chairman & Founder, SINET Robert served over twenty-two years as a Special Agent with the United States Secret Service. He is the founder of the Security Innovation NetworkTM (SINET) whose mission is to advance innovation and enable global collaboration between the public and private sectors to defeat cyber security threats. SINET serves as the nucleus that connects builders, buyers, researchers and investors in the cyber security domain. His executive protection experience spanned 10 years at the White House serving Presidents Ronald W. Reagan, George H. Bush, William J. Clinton and numerous Heads of State. During his career he held a number of leadership roles within the Executive Protection, Protective Intelligence, Inspection and Criminal Investigation Divisions. SINET accelerates business opportunities for both small and large companies through their strategic advisory services, community – building activities and networking events. The annual IT Entrepreneurs Forum (ITSEF) at Stanford University, the Innovation Summit at Columbia University, New York and SINET Showcase in Washington D.C. Are supported by the U.S. Department of Homeland Security Science & Technology Directorate, public and private sponsorships and an elite steering committee. Robert is the catalyst who leads and builds global collaboration models that advance innovation and connects the ecosystem of the entrepreneur; academia, science, private industry, investment banking, system integration, policy, innovators, law enforcement, venture capital and the Federal Government to include the civilian, military and intelligence agencies. He is known for building communities of interest and trust between disparate groups. SINET initiatives and advisory services accelerate both large and small companies business growth, increase awareness of innovative Cybersecurity technologies and helps develop relationships between the system integration, industry and Federal Government markets to collaborate on addressing IT Security challenges, needs and opportunities. In 2001, Robert spearheaded the development of the Secret Service’s first public-private partnership Cybersecurity initiative in Northern California. Since 2005 he has been coordinating the public private sector outreach for the DHS – SRI International Cyber Security R&D Center and the Computer Science Department at Stanford University. He is an advisor to Stanford University Computer Science Department. He served on the US Air Force Advisory Board that helped design a public private construct relative to Cybersecurity and has been called upon numerous times by the Federal Government to help coordinate their private sector outreach. Mr. Rodriguez believes in mutually beneficial relationships that are top down-bottom up and trust based. He serves on the Board of Advisors for The Chertoff Group, as Director Emeritus for the San Francisco Kraft Fight Hunger Bowl, National Cyber Security Hall of Fame Board of Directors and is a certified graduate of the Federal Government’s Senior Executive Service Program. He is a recipient of the 2009 CSO Magazine Compass Award in recognition of outstanding leadership in the security field.